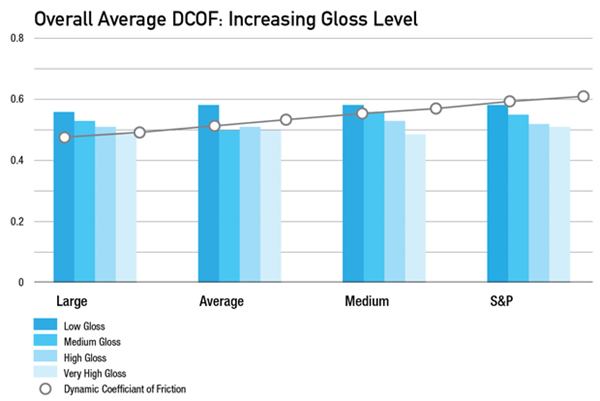 Coefficient of friction for polished concrete

Polished Concrete DCOF During a six-month study at Clemson University that ended in December 2014, a CPAA subcommittee tested three slabs using the ANSI A-137.1 methodology. Each slab was divided into 16 squares processed to replicate a different polished concrete category. The 16 categories of product classifications were based on all possible combinations of four aggregate exposures and four gloss levels, including cream and very high gloss (see chart).

A third party, the Tile Council of North America (TCNA) Laboratory, performed wet DCOF testing and found that all 16 categories surpassed the 0.42 minimum threshold. In fact, most measured 0.50 and higher, well above what’s considered to be high traction.

To ensure statistical reliability, all three slabs were tested in an identical manner. The results were extremely similar for each slab.

Faller served on the CPAA subcommittee that tested the slabs along with Peter Ermish, CEO of Variosystems Inc. and developer of Regan Scientific Instruments Inc.’s BOT-3000E tribometer. The BOT-3000E used in the study is approved by the National Floor Safety Institute (NFSI), TCNA, and CPAA for use with their respective DCOF standards, but any tribometer with similar approvals can be used.

Hazardous flooring is the culprit behind most of the more than 1 million slip-and-fall emergency room visits every year.

In January 2015, Heather Stiner, protective coatings professional at SSPC: the Society for Protective Coatings, spoke at World of Concrete’s Polishing Luncheon and Forum about standards in development that could apply to polished concrete, including a guide to evaluating the slip resistance of treated flooring surfaces.

Other standards in the works include coating texture, several surface preparation methods, and concrete moisture.

“Friction at the floor-shoe interface (floor traction) has a much larger influence on slipping than a pedestrian’s awareness or behavior,” says Ermish. “Research shows that the incidence of slip accidents can be reduced by as much as 21% with every 0.1 increase in COF.”

There are two COF values. Static (SCOF) refers to how much force is required to start an object moving. Dynamic (DCOF) is how much is required to keep it moving — the force that turns a slip into a fall.

For example, if it takes 42 pounds of “push” to keep a 100-pound object moving, the DCOF value is 0.42. Thus, if the surface provides 42 pounds of friction resistance to someone whose gait cycle generates 100 pounds of force, it will provide enough traction to keep that person from slipping and falling.

SCOF has been more common in the U.S.; DCOF is more prevalent worldwide. However, DCOF is fast becoming a go-to measurement in the U.S., thanks to two standards adopted by ANSI since 2012:

A dirty floor is much more likely to cause someone to slip and fall than a clean floor. The wet DCOF threshold of 0.42 is required by ANSI A-137.1 for flooring that may be exposed to wet contamination — in other words, conditions that aren’t always clean and dry.

Ermish says the 0.42 target is based on decades of research in Germany that defined a “worst case” wet DCOF of 0.36. The research included an evaluation of accident statistics matched to laboratory re-enactments. By adding an additional 0.06 as a statistical margin of error, researchers concluded that 0.42 would lower the risk of a slip-fall accident to a 1 in 10 million probability. In contrast, 0.29 or less increases the risk to 1 in 10,000 or higher.